Today, Lindley and Quarmby are neighboring parishes not far from Huddersfield town centre. Looking for West Gate on a modern map of Huddersfield only shows a street within the town centre – but too far away to assume it was the same street the Brook family called home.

This combined name of Lindley-cum-Quarmby, or in some cases Quarmby-cum-Lindley, appears within many sets of records. Geographically, the represents a large industrial area that was home to many of the textile mills of Huddersfield.

Wool production here was a key occupation, ostensibly due to the quality of the washed raw wool produced after dipping in water flowing from the Millstone Grit Pennines.

Traditionally, the spinning and weaving of the material would often take place at the home. By the time of the Industrial Revolution, production evolved, and textile mills took over the literal ‘cottage industry’.

There was little option for the majority of the townspeople of Samuel’s lifetime but to turn to the textile mills, and hone their skills.

‘Made in Huddersfield’ became a global brand for the time, and was even a choice for royalty. After the extensive ‘boom’ in business in the late 1800s, the mid-20th Century saw its decline, and those mills still standing today represent the shell of the town as it was. 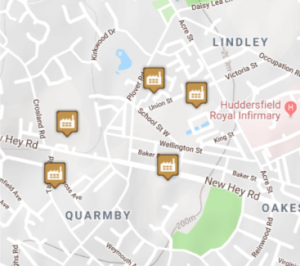 This modern map shows five of the eight textile mills located within the Lindley-cum-Quarmby area.

Some of the mills have been developed for other uses, or demolished. Oakes Mill is still standing, as shown on the Google Maps image above.