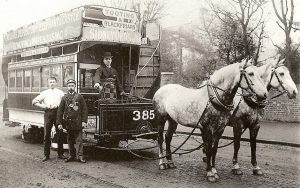 In 1902 there were two types of trams in use : horse-drawn, and electric.

Horse-drawn trams began operating around 1860 in London. These could hold around 60 people.

Horse-drawn tram rails were set above-ground, meaning other road users had to drive their carts over the rails. The general consensus was that the trams were liked by the majority that used them. However, other road users did not like them at all.

Passengers would have been charged 1d (the d is the old symbol for pence) per mile . On some trams passengers would be charged half that, if they were traveling late at night or in the early morning. 1d in 1870 would be the equivalent to £0.19 in 2005 Sterling.

In 1870, the government passed an act of Parliament calling for an expansion of the tramways – on the condition that the lines were set into the ground, and the maintenance of the highways would be the responsibility of the company running the line.

At the turn of the century new electric tramcars were becoming commonplace.
By 1903, there were approximately 300 electric trams running, and by 1915 the last horse-drawn tram ended its service.

Electric trams ran across the country, and operating them was one of the many jobs taken over by women during World War One.

Fast forward another 30 years, and electric trams in London were being replaced by diesel buses.

In 1952, the last tram ran in London after the successful implementation of ‘Operation Tramaway’ – the name assigned to the task of replacing all trams with buses. It wouldn’t be until the year 2000 that trams would again become part of London life, notably in Croydon and Wimbledon. 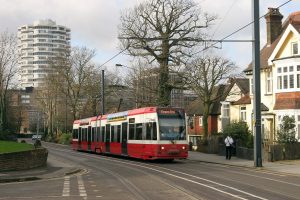